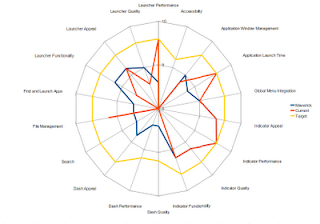 Today I am finally finding Natty to be usably stable. So long as I stay away from Open Office, it seems to be running quite fine. So, I updated my maverick spider diagram in an attempt to capture where I think Unity is in the journey to being the Ubuntu desktop.

In this first natty diagram, yellow is the target, blue is maverick, and that orangy color is my subjective assessment of Unity as it is today. You can review the criteria that I chose from assessment in a previous post.

Note that there is a large portion of the diagram missing. Everything related to the Dash is zero, because none of that is implement yet. Here is a summary of why I picked these values for the other items:

Natty > Maverick
Maverick > Natty
Natty == Maverick
I also just noticed that key nav between the indicators isn't working! grrrr. It's also not working for the global menu. Well, Accessibility is already rated zero, so there's really no way to change my ratings based on that, unless I added it to "Indicator Functionality". I'll see how annoying it is to me, and maybe change it then.
Posted by Rick Spencer at 3:57 PM 2 comments:

Ubuntu is *not* moving to a rolling release

So, I just got asked to provide a statement about whether Ubuntu is moving to a rolling release. The statement I provided was:

"Ubuntu is not changing to a rolling release. We are confident that our customers, partners, and the FLOSS ecosystem are well served by our current release cadence. What the article was probably referring to was the possibility of making it easier for developers to use cutting edge versions of certain software packages on Ubuntu.This is a wide-ranging project that we will continue to pursue through our normal planning processes."

The reason that I was asked to comment on this was that an article appeared this morning that built off of some comments that Mark made regarding daily builds. The article went on to make some reasonable conjecture about possible implications. Links to this article were then labeled things like "Ubuntu Moves to Rolling Releases!"

I do like the idea of making it easier for developer and enthusiasts to use daily builds of software that they really care about, and maybe even have them discover this capability through the software center. Currently you have to find PPAs or maybe activate backports to do this. But having a stable release with a six month cadence plus the option to stay cutting edge on certain packags (at your own risk) is not really a rolling release.
Posted by Rick Spencer at 9:50 AM 15 comments:

I was about half of last week, and this Monday as well. So I didn't do a week 2 update. Again,, please note that these are things that are happening that I found interesting or important, or was otherwise involved in. This is not the status of work that I personally did. Here's my perspective on week 3 ...

Back from UDS for a week now. Here's a progress update on some of the happenings in Ubuntu that I am tracking. There are, of course, myriad other aspects to the product that I care about, but that I am not following closely. You may notice a strong correspondence between these areas and The 5 Foci.

Of course I am doing almost none of this work personally. When it makes sense I'll credit the specific people and/or teams. Questions and comments welcome, of course. I have no idea if this kind of thing is useful to folks. But I wonder if I can keep up a weekly cadence of updates.

Unity
This week
Next Week