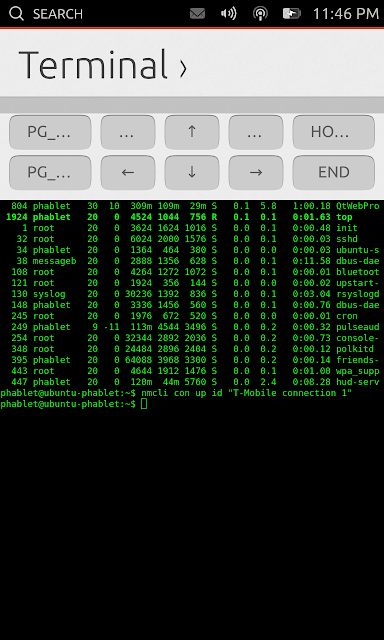 Last week I was in Washington DC house hunting (successfully, I might add ;) ). Since I abandoned my Android phone for full time Ubuntu Touch phone, the lack of cellular data was painful, but not as painful as I thought it would be because there was wireless everywhere. However, there were a couple of times that I would have liked to have checked email and such when I wasn't around wireless. Also, I get lost easily, so not being able to check a map was a painful regression once or twice.

So, today, I was really happy to get the cellular data set up on my phone, and knock around Seattle a bit trying it out. It worked really well. It was interesting to see how so much of the slowness of my old phone was the phone itself, and not the cellular network speed as I had thought. I got a nice snappy experience on Ubuntu Touch.

In the image above, you can see that one needs to use the terminal to turn the cellular data connection on and off. I wish we had co-developed the GUI with the backend support. I would like us to start thinking more across the team, seeing if we can bring experiences out in full. That said, I know it was a huge amount of work to get data working, and having the back end working and keeping it working is certainly a solid way to develop. So, great job to the Phonedations team!

Having cellular data completes the "daily driver" goals we set! Never one to rest, now I am thinking about what would bring parity for my Ubuntu Touch phone in terms of the features that I actually used on my Android phone. The list is modest:


I'm sure everyone has a different list like this, but I bet I am the only one with Euchre on their list. :)
Posted by Rick Spencer at 5:54 PM