The Dash Has Landed 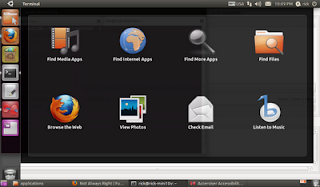 User visible changes to Unity have slowed down quite a bit until this week. There have been things like bug fixes landing, and the nm-applet getting indicatorized, and then that getting fixed up. But essentially, Unity has been just the launcher and the panel with indicators for weeks. 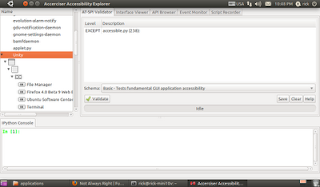 It isn't reporting it's objects sufficiently to actually use yet, but I'm bumping up the accessability dimension a tad from zero to account for this project. Also, alt-keys work in application menus now!

The other thing that landed is the dash. Now you, can see from the above screenshot that it's a crude first cut at the dash, only let's you click a few buttons. However, there is a lot of work underhood to make that show up. So, I expect we'll see search showing up soon! Than after that, there won't be too much work to get the dash up to functional parity with Maverick!

So, the updated spider diagram shows that Unity is almost covering it's shape from Maverick. 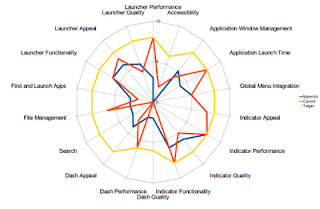 Hopefully with the introduction of the the dash, the left hand side of the graph should start filling in very quickly.