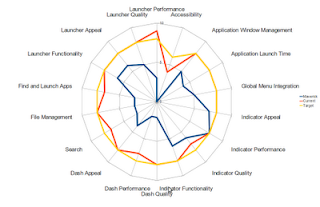 So, I'm a bit surprised how much people liked my spider diagrams to update folks on my perception of the state of Unity. It's been hard to update that last few months, just because Unity has been changing so fast. However, those changes have slowed down, and I've gotten some requests, so here is my post-beta 1 spider diagram for Unity.

As you can see, the orange line, Unity, almost overlaps the yellow line, our target for Natty. Obviously, this is a major accomplish for many teams involved in this project. I've been using Unity and my netbook and on my desktop for months now. Over the last few weeks it has crisped up into a very tight experience. Of all the desktop environments I have ever used, Unity is by far my favorite.

Here are some notes on the remaining gaps:

Crashers
One thing not reflected in the graph is the number of crashers, particularly in compiz, that have been reported. The crash reports have slowed down, and the crashes are getting fixed. If we stay focused, I believe that we will fix all of the common, and most of the not so common crashers.

Accessability
The only very painful gap is in accessability. Unity is very keyboard friendly, so that's good. The Launcher is completely exposed to screenreaders, so that's good. However, the dash is not completely exposed to screen readers. This means that blind users won't be able to use Unity without some modifications. This is unfortunate, indeed. Fortunately, the "classic" desktop is still as accessible as it has always been. Work continues on making the dash accessible, but it won't make it into Natty by release. I'd love to see a PPA or even an SRU to close this gap after release.

Search
Search is good, however, there are certain substring searches which maddenly don't work yet. For example, if I search for "Torrent" I don't get Transmission in the list, because it's a "BitTorrent" client.

Find and Launch Apps
I think the category view is good, but could be a bit easier to find and activate.

Dash Performance
Sometimes when I do a search in the Dash, it thinks for a bit before it responds to my enter key. This slows me down a bit when I am trying to launch something quickly.
Posted by Rick Spencer at 9:42 AM